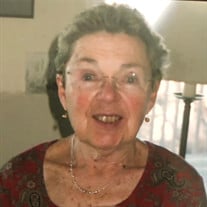 Barbara C. Loftus (nee Carey), 84, of Highlands, NJ, passed away peacefully on November 8, 2021. Barbara was born on January 28, 1937, in Astoria, Queens, NY, to Terence and Anne (Lewando) Carey. Although Barbara left Queens in her early twenties, it never left her. A proud “city girl” she graduated from Mary Louis Academy in Queens and went on to work in Manhattan at Equitable Life Insurance. She was a life-long subscriber to “New York” magazine, a frequent attendee at Broadway shows and was always up on the latest restaurants and happenings. Barbara met the love of her life, John Loftus, as a summer girl (aka benny) in Highlands, NJ and they wed in 1960. After celebrating their nuptials at Tavern on the Green in Central Park, they settled into their new home in Atlantic Highlands, NJ before relocating to Central Valley, NY where they raised their four children. Barbara was very involved in her children’s lives and her community and was a devout Catholic. She was a Cub Scout Den mother and assistant Brownie leader, volunteered at school events and was a member of the League of Women Voters and the Women of Woodbury. She spent many days and weekends at her children’s sporting events, but Wednesdays were always reserved for her much-loved bowling league. As her children grew, Barbara returned to work; first at the office at Gasho of Japan and then for Professional Planners. Barbara was small in stature but large in character and was the hub of the family. You would never know she was in chronic pain from severe rheumatoid arthritis as nothing got in her way when she put her mind to it. Known as “Honey Bunny” in the NY neighborhood football pool, it was originally the name she called other people when she was asking them for a favor. Barbara was very social and loved to have a good time with family and friends. She treasured summers in Highlands, vacations, dining out, playing games, and enjoying holiday traditions just as much as going to happy hour outside to listen to live music while gazing at the Shrewsbury River. She found great joy in the special “chats” she had with each of her grandchildren. She loved them all deeply; and they, her. She wanted her end of life to be a celebration with stories, music, laughter, and bright colors. Barbara is survived by her beloved husband of over 60 years, John; her son Carey Loftus and wife Sarah of Middletown, NJ; her son Patrick Loftus and wife Lauren of Osprey, FL; her daughter Stephanie McCorry and husband Tom of New City, NY; her daughter Tara Loftus and husband Kieran Forkan of Middletown, NJ; her sister Renee Geary and husband Michael; nine grandchildren: Shane, Conor, Meaghan, Anna, Aidan, Jack, Maeve, Keelin and Seán; and numerous nieces, nephews, extended family and friends. The family will receive friends on Thursday, November 11, 2021 from 4:00pm-8:00pm at John P. Condon Funeral Home at 804 Highway #36, Leonardo, NJ 07737. A funeral mass will take place at 10:30am on Friday, November 12, 2021 at Our Lady of Perpetual Help Church at 141 Navesink Avenue, Highlands, NJ 07732. In lieu of flowers, donations can be made to the Arthritis Foundation or the Alzheimer’s Association.

The family of Mrs Barbara C Loftus created this Life Tributes page to make it easy to share your memories.

Send flowers to the Loftus family.