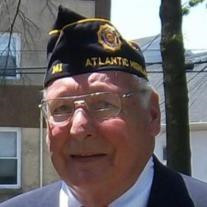 Bernard J. Frotton, 80, of Atlantic Highlands died Thursday, September 20, 2012 at Monmouth Medical Center in Long Branch. He was born in Newark, and resided in Atlantic Highlands since 1970. Mr. Frotton served his country honorably in the United States Marine Corps during the Korean War, and was a recipient of the Purple Heart Award. After returning from his military service, Mr. Frotton worked as a sales manager for Jones & Auerbacher in Kenilworth for 39 years. He was a member of American Legion Post 141, where he served as a Past Commander. Bernie was the annual Memorial Day Parade Chairman in the Borough of Atlantic Highlands for over 30 years. He was employed as the Zoning and Code Enforcement Officer, Multi-Family Dwelling Inspector, and Fire Inspector in Atlantic Highlands for 17 years, and served on the Borough Council, Harbor Commission, Borough’s Shade Tree Commission and the Recreation Committee. He was a member of the Monmouth County American Legion, where he served as the County Adjutant. He was a co-founder of the Henry Hudson Booster Club, and he was an Atlantic Highlands Pop Warner Football Coach. He was predeceased by his parents, Emma and Benjamin Frotton, and his recently deceased brother Gerald Frotton of California. He is survived by his loving and devoted wife, Jane Frotton of Atlantic Highlands; his children Linda Moore and her husband Robert, Cranford; Dana Forfa, Kenilworth; Renee Frotton, Middletown; Jim Higgins and his wife Christine, Eatontown and Sr. Dianna Higgins FMIJ; Woodbury Heights and Grandchildren M Devon Moore, Chicago, Richard and Jason Forfa, Kenilworth, Jocelyn Velazquez ,Middletown, Kyle and Clare Higgins, Eatontown. He is also survived by his brothers Francis Frotton of Tennessee, Arthur Frotton of Maryland, Richard Frotton of New York, Peter Frotton of South Carolina, and his sister Patricia Field of Atlantic Highlands. He is also survived by numerous nieces and nephews. The family will receive their friends from 2-5 pm and 7-9 pm Sunday at John P. Condon Funeral Home LLC, 804 St. Hwy. #36, Leonardo, New Jersey. A Mass of Christian Burial will be celebrated 10:00 am Monday at Our Lady of Perpetual Help Church, 141 Navesink Ave, Highlands. Interment will be in Bayview Cemetery, Leonardo. In lieu of flowers donations can be made to the C. Eugene Allen Memorial Post #141, American Legion, PO Box 240 Atlantic Highlands, NJ 07716 that maintains the American Flags on Memorial Parkway

Bernard J. Frotton, 80, of Atlantic Highlands died Thursday, September 20, 2012 at Monmouth Medical Center in Long Branch. He was born in Newark, and resided in Atlantic Highlands since 1970. Mr. Frotton served his country honorably in the... View Obituary & Service Information

The family of Mr Bernard Frotton created this Life Tributes page to make it easy to share your memories.

Send flowers to the Frotton family.