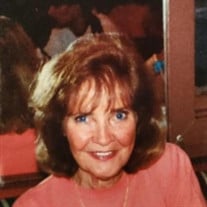 Eleanor “June” Duncan (nee Gates), age 89, owner of Shore Aluminum Sales, and a lifelong resident of Leonardo NJ, died Thursday, July 2, 2020 surrounded by her family. June is survived by her children, Susan June Haese, James William Duncan, and his fiancé Melissa Cuvanov, of Leonardo: a grandson Michael John Haese, and his wife Carolyn of Atlantic Highlands; her sister-in-law Dorothy Monahan, many nieces and nephews; and June’s sweetheart for the last twelve years, Ralph Lengyel Sr., of Leonardo. June is predeceased by her beloved husband of 46 years John William Duncan. June was born in Newark, NJ on November 22, 1930. She spent her childhood residing in Belleville, NJ, and Hialeah, Florida. On November 15, 1952, she married John “Jack” William Duncan. They began their family and moved to Leonardo, NJ where they built their family home. Jack and June purchased Shore Aluminum Sales in 1967, Keansburg, NJ, and expanded their family business, which flourishes to this day. June had an affinity for horses, which began when she was a child. She loved to travel and did a “count down” of days before her much anticipated yearly trips to Hawaii. You could also see June cruising around town in her red Corvette. The viewing will be held on Wednesday, July 8, 2020, at 10:00 am followed by a funeral at 11:00 am at John P Condon Funeral Home LLC, 804 State Highway 36, Leonardo NJ. Burial will be in Bayview Cemetery, Leonardo following the service.

The family of Mrs Eleanor "June" Duncan created this Life Tributes page to make it easy to share your memories.

Send flowers to the Duncan family.