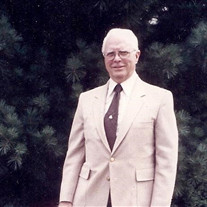 Erwin Forrest, 93, of Leonardo, died Tuesday, May 26, 2015, at home. Born in Belford, NJ, he lived in Leonardo since the age of 5. He was a Mechanical Engineer at Fort Monmouth for at least 35 years, and worked on many important projects for the Defense Department, including having been part of the team to develop the first communications satellite. There is a satellite in space with his name on it. A parallel career took him into the realm of bowling. He joined the Monmouth County Bowling Association in 1942 and proceeded to become a leader very quickly. He formed leagues and was their Secretary/Treasurer. He served the Association as Vice President, becoming President in 1959. He served as County Association Secretary/Treasurer and was honored as Secretary/Treasurer Emeritus in 1985. For the remainder of his service to the board he was Assistant Secretary/Treasurer and handled all the checking and finances. He was also the manager of the Monmouth County Masters Tournament for many years. In 1945 he joined the New Jersey State Bowling Association serving as a Director, and then proceeded to go through the chairs of Vice President to become President in 1984. He took on many duties at the State level including managing the State Masters Tournament for many years. In 1975 he was inducted into the Monmouth County Bowling Association Hall of Fame for Meritorious Service, and in 1986 he was inducted into the New Jersey State Bowling Association Hall of Fame for Meritorious Service. Luke was a charter member of the NJ State Travel League, has represented Monmouth County at the National Bowling Convention for over 30 years, has sponsored the Forrest Enterprises Team in the National Championships Tournament for over 20 years, and had been the soul and conscience of the Monmouth County Bowling Association for over SEVENTY years. Luke started writing a Bowling Column in the 1950’s, first for the Long Branch Daily Record, then for the Red Bank Register, and next for the Asbury Park Press. He was a member of the Bowling Writers Association of America nationally for many years and the Metropolitan Bowling Writers Association locally and was their Treasurer from 1990 to 2008. Luke was honored to receive the Joe Richards Memorial Hall of Fame induction award from the MBWA. His weekly column promoted and supported the better bowlers of the day and was always something everyone looked forward to reading. In addition, Luke was a communicant of St. Agnes Church in Atlantic Highlands, where he went to school and was married. Luke was also a 4th Degree Knight of the Knights of Columbus, and a member of the Red Bank Council. Luke was pre-deceased by his wife of 68 years, Erna Green of Leonardo, his sister, Virginia Kirwan, and his brother, Gerard Forrest. He is survived by his daughter, Joanne Ramsey of Atlantic Highlands and her companion, Raymond Vogel of Brick; a granddaughter, Cherie Himmelreich and her husband Joseph; and two great-grandchildren, Larkin and Lucas. The family will receive their friends from 6 to 9 PM on Friday, May 29 at the John P. Condon Funeral Home, 804 State Hwy. 36, Leonardo, NJ 07737. A Funeral Mass will be held at 10 a.m. Saturday, May 27 at St. Agnes Church, 103 Center Ave, Atlantic Highlands 07716. In lieu of flowers, expressions of sympathy should be directed to the St. Barnabas Hospice, CW6, 300 Second Ave., Long Branch, NJ 07740, or the Alzheimer's Association, 12 Rozel Road, Princeton, NJ 08542. Condolences may be sent to the family through John P. Condon Funeral Home, 804 State Hwy. 36, Leonardo, NJ 07737.

Erwin Forrest, 93, of Leonardo, died Tuesday, May 26, 2015, at home. Born in Belford, NJ, he lived in Leonardo since the age of 5. He was a Mechanical Engineer at Fort Monmouth for at least 35 years, and worked on many important projects for... View Obituary & Service Information

The family of Erwin P. "Luke" Forrest created this Life Tributes page to make it easy to share your memories.

Send flowers to the Forrest family.