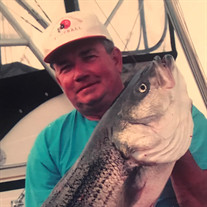 Leonardo: Jerry Snyder passed away on Friday, December 27, 2019, at Riverview Medical Center, Red Bank, NJ, with family by his side. Born in Jersey City on October 17, 1948 to the late Bernard and Margaret Snyder. Jerry moved to Leonardo with his mother and brother Bernie in 1958. Surviving is his wife of 49 years, Mary (Hawley), two daughters, Margaret Snyder of Leonardo, and Christine Martin and her husband Jeffrey, of Atlantic Highlands. Three grand sons, Tyler & Chase Connell of Leonardo and Jayden Martin of Atlantic Highlands. He is also survived by his brother Bernard Snyder and his wife Suzanne, of Lanoka Harbor, his brother John Barry Snow and his wife Karen of Orlando, FL, his cousin Joseph O'Leary and his wife Marion, of Maynard, MA, his Aunt Dorothy O'Leary formally of Jersey City, his Uncle Danny of, DesPeres, MO and numerous nephews, nieces and cousins. His sister in-law Theresa Hawley of Buffalo, NY and Marguerite Dombroski of WV. He is predeceased by his cousin Brian O'Leary and his Aunt Eileen & Uncle Joe Marinaro of Forked River. Jerry was an active parishioner of St. Agnes R.C. Church. He was member of the Holy Name Society and Counters. He graduated from Middletown High School. Jerry was a Sergeant in the United States Marine Corps, he served four years with one year tour of duty in Vietnam. Member of American Legion Post 0338 Leonardo, NO-VEL Post 159, Venice FL,VFW Post 2179 MDT. He is a life member and past president of Leonardo and Brevent Park Fire Company. Past president of Leonardo First Aid Squad. He retired in 2008 from Conrail, Ridgefield, NJ after 34 years of service. Family and friends are invited to gather on Monday, December 30th from 5:00p to 8:00p at John P. Condon Funeral Home, Hwy 36, Leonardo. A mass of christian burial will be celebrated at St. Agnes Church, 103 Center Ave, Atlantic Highlands, on Tuesday, December 31st at 10:00a. In lieu of flowers donations can be made to Brevent Park and Leonardo Fire Company PO Box 2, Leonardo, NJ 07737.

Leonardo: Jerry Snyder passed away on Friday, December 27, 2019, at Riverview Medical Center, Red Bank, NJ, with family by his side. Born in Jersey City on October 17, 1948 to the late Bernard and Margaret Snyder. Jerry moved to Leonardo with... View Obituary & Service Information

The family of Mr Gerald "Jerry" Snyder created this Life Tributes page to make it easy to share your memories.

Send flowers to the Snyder family.