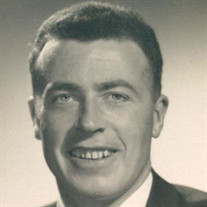 Gerard (Jerry) Quinn, 91, of Leonardo died Monday, February 22nd at his home after a brief illness. Jerry was born in 1930 in a thatched house on a small farm in Quignashee, Ballina, County Mayo in the west of Ireland. He was one of eight boys and two girls. Jerry was the seventh son in a row, and according to Irish folklore, was gifted with healing powers. He was born on the same small farm as his father and grandfather, which was also the birthplace of Jerry’s first four children. They may not have had many of life’s luxuries, but they had an abundance of what is really important in life. They had the love and guidance of two wonderful parents, William and Catherine Fox Quinn, and the closeness and loyalty of 10 brothers and sisters. Hard work, strong family values and devotion to their Catholic faith were most important. All twelve knelt together each night to recite the rosary. Jerry emigrated to New York in 1954 and soon afterwards joined the Longshoremen’s union. Later he joined union construction where he remained for the next 50 years. He loved going to the job site every day, and thrived on a hard day’s work. His coworkers will never forget his many unique sayings. In 1961 he met the love of his life Julia (Shiela) Ward at a club for Irish immigrants in the Hotel Benzell in Newark, NJ. They were married in Shiela’s hometown of Caltra, Ballinasloe, County Galway, Ireland in 1964. In 1968 Jerry purchased a home in Leonardo, NJ, a home he loved and enjoyed for the past 53 years. The home was always a hub of activity. Education was very important. All the children graduated from St. Agnes School. The girls graduated from Mater Dei High school and the boys from Christian Brothers Academy. It was a great source of pride when each one graduated from college. Jerry loved sitting on his porch looking out at the water and the New York City skyline, listening to classical music, and enjoying a Guinness. In retirement he loved to read, especially about Leonardo Da Vinci and any book by or about Stephen Hawking. Jerry enjoyed his daily bike rides, playing with his grandchildren who called him “Popsy”, tending to his garden, enjoying nature and birdwatching, and using his beautiful voice to sing his favorite Irish songs. Most of all Jerry loved sharing every moment with Shiela whether it was watching tennis, soccer, basketball, following gaelic football or their favorite television programs. Jerry is predeceased by his parents and his sister, Sr. Mary Assumpta Quinn of the Mercy Sisters, and brothers: Reverend Peter Quinn, former pastor of St. Anthony’s Church, Lakeland, Florida, Reverend Desmond Quinn of the Columban fathers, Patrick Quinn, Eugene Quinn, Bernard Quinn, Liam Quinn, and James Quinn, and his sisters-in-law; Phyllis Quinn, Betty Quinn, and Marjorie Quinn. He was also predeceased by his precious children: David Desmond Quinn and Brendan David Quinn. He is survived by his sister, Sr. Josephine Quinn, Franciscan Missionaries of Mary, Dublin, Ireland, his loving wife of 57 years, Shiela, his sons: Reverend Jarlath Quinn, Pastor of OLPH-St. Agnes Church, Atlantic Highlands, Gerard Quinn, and Kenneth Quinn. His daughters; Edel Quinn and Siobhan Quinn and seven precious grandchildren: Moira, Vincent-Brendan, Joseph-David, Alanna, Ava Rose, Ireland, and Aoife. He is also survived by many nephews, nieces and friends. Dad, you were our Irish Blessing. You were our EVERYTHING! Mass of Christian burial will be offered on Friday, February 26th at 11 am at St. Agnes Church. Prior to the mass there will be a gathering at 10 am at St. Agnes church. In lieu of flowers, contributions may be made in Jerry’s memory to OLPH -- St. Agnes Church 103 Center Ave., Atlantic Highlands, NJ 07716.

Gerard (Jerry) Quinn, 91, of Leonardo died Monday, February 22nd at his home after a brief illness. Jerry was born in 1930 in a thatched house on a small farm in Quignashee, Ballina, County Mayo in the west of Ireland. He was one of eight boys... View Obituary & Service Information

The family of Mr Gerard "Jerry" Quinn created this Life Tributes page to make it easy to share your memories.

Send flowers to the Quinn family.