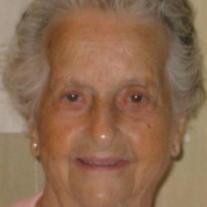 Gladys June McGrath passed away peacefully on Sunday, January 15 at her son’s home in Ft. Pierce, FL, with her family by her side. She passed on in death the way she lived her life, with grace and dignity, she was 92. June was born in East Orange where she lived and worked at Westinghouse before moving her family to Port Monmouth in 1950. June worked at Brookdale Community College until retiring in 1985 when she moved to Highlands. She was a former member of both the Highlands Senior Citizen Club, as well as the Highlands First Aid Auxiliary. June loved playing cards, bingo and going to A.C. but above all, spending time with her family. She was a kind, loving, gentle person who had a fun personality and will be sorely missed by her family and all who knew her. June always had a smile and wanted to see the same from everyone she met. June was pre-deceased by her loving husband Thomas S. McGrath in 1983 and her beloved daughter, June E. Olcott in 1989. Her parents Randolph and Catherine and brother Randolph Jr. and sister Dorothy Quinn. She is survived by her loving, devoted children, her daughter Katherine A. Branin and her husband Joseph; her son Tom McGrath and his wife Rosemary; and son-in-law Ross Olcott; 11 deeply cherished grandchildren who lovingly called her “Nana” and are terribly saddened by their loss, they will keep her in their hearts always: Jamie Branin and wife Michelle, Colleen Layton and husband Les, Jill Busanic and husband John, Debbie Lamberson and husband Bob, Tammy Quintero and husband Dave, Ross Olcott and wife Kathleen, Joanne Keenan and husband Scott, Carol Taylor and husband Robert, Suzanne Henry and husband Tom, Stephen Olcott and wife Corrine and Jennifer Branin; 26 great grandchildren; 2 great-great grandchildren; 3 nephews and their wives. A viewing for family and friends will be held on Thursday, January 19, 2012 from 4:00 to 8:00 p.m. at the John P. Condon Funeral Home, 804 Highway #36, Leonardo, NJ 07737 (732-291-0234). The funeral services will be held on Friday, January 20, 2012 starting with a final viewing from 9:30 to 10:30 a.m. at the funeral home followed by an 11:00 a.m. Funeral Service at the Bayview Cemetery located at Hosford Avenue and Stilwell Road, Leonardo. In lieu of flowers, the family requests donations, if you wish to Shriners Hospitals for Children – Philadelphia, 3551 North Broad Street, Philadelphia,, PA 19140. This hospital made a difference in the life of one of June’s grandsons, helping him to survive and thrive despite a rare bone disease. Donations may also be made by accessing the following link: Support Shriners Hospital.org

Gladys June McGrath passed away peacefully on Sunday, January 15 at her son’s home in Ft. Pierce, FL, with her family by her side. She passed on in death the way she lived her life, with grace and dignity, she was 92. June was born in East Orange... View Obituary & Service Information

The family of Mrs Gladys June McGrath created this Life Tributes page to make it easy to share your memories.

Send flowers to the McGrath family.