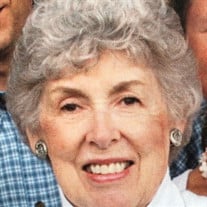 Joan Pomeroy Rowe, also known affectionately as Jummy, Joan, Ma, Grandma, Great Grandma and Mom, departed this earth peacefully on July 15th with her son and daughter at her side. Just two weeks shy of her 94th birthday, Joan’s life was full, taking her across oceans and back again, moving around the country, and eventually finding a home in Atlantic Highlands, where she spent her last 30 years. Joan spent much of her early years with her family living for short periods of time across Europe, mostly England, Sweden, Spain, France and Belgium. In later years, she frequently recalled her various addresses, the styles of the times, and the adventures she shared with her younger sister Joyce. She also worked for a spell during WWII at the US Embassy in London, with lots of stories to go with the experience, including rushed trips back to the US when the war was advancing toward London. Her family ultimately moved to Texas, where she completed three years at the University of Texas before moving again, before she had a chance to graduate from college, this time to New York City. In NYC, she got a job working at Rockefeller Center for NBC—more adventures. She married while in NYC, lived for a bit in Stuyvesant Town, and then moved to the New Jersey and began raising two children—Hester and Jim. As a single working mom during a time when it was quite rare, she gave complete and total devotion to her family, a commitment that never wavered even in her last days. It was pure sacrifice to take on the role of mother, father, teacher, coach, protector, advisor, planner, mentor and carrier of the weight of the real world for her kids. She missed many life experiences so that her family could builds lives and have experiences of their own. No complaints, ever, and when asked about all the work she handled solo, she always just waved it off by saying “it just had to get done”. She also had deep love of dogs, most notably her golden retriever Casey, her favorite companion for many years. From very early on and through good times and challenging times, Joan carried herself with grace, kindness, class and a never-ending ability to laugh at tough circumstances. Without any prodding, the most frequent comment about her that others have shared is that she was “lovely”. We totally agree, and then some. In addition to her children and sister Joyce, she is survived by daughter-in-law Tamara who will always recall Joan's small bits of wink-and-a-nod mischief; newly married grandson Ryan and his wife Kristine who are expecting a daughter in August; granddaughter Jordan who inherited Joan’s resilience and whose days are full raising Hadley, Collins and Owen with her husband Shane; granddaughter Taylor who visited her loyally, was a constant companion, made her laugh and who picked up Joan’s love of overseas travel; granddaughter Camille who attends college and lovingly wears a special necklace given to her by Joan; grandson Walker, a recent high school graduate heading to college in the fall and ready to embrace a hearty football season just as Joan did in her Texas days; and sister Joyce’s family: brother-in-law Bud, niece Sue, and nephew Jake Pomeroy (wife Marlene, children Kyle and Kaley). We miss you dearly Jummy, but it’s your time now to rest. We can take it from here, thanks to you. Contributions can be made to the Monmouth County SPCA (https://www.monmouthcountyspca.org) or Save the Children (https://www.savethechildren.org).

The family of Mrs Joan Rowe created this Life Tributes page to make it easy to share your memories.

Send flowers to the Rowe family.