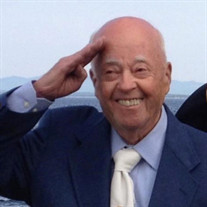 Leslie W. Rohrig of Highlands, New Jersey, died on January 15 following a brief but courageous battle with cancer. At 94, he told his family, “I’m not going down without a fight” and “When the going gets tough, the tough get going.” Leslie and his brother Harold were the first twins born at Shore Road Hospital in Brooklyn, New York, on October 6, 1927. Together they served in the United States Navy. On May 20, 1950, Leslie married the love of his life, Alice Beradelli, at St. Francis of Assisi Church in Astoria, New York. They raised their three children there, Patricia M. Manuli of Wappingers Falls, New York, James L. Rohrig (Loretta Reilly), of Highlands, New Jersey, and Mary Ellen (Bill)King, of Amity Harbor, New York. Nothing made Leslie happier than spending time with his family, especially his six grandchildren: Stephanie Nicole (Steve) Mazza, Brittany Ellen King, William Joseph (Lindsay) King, Cpt. Steven Christopher (Nina) Rohrig, Rachael Alison Rohrig (Tony Christiano), and Corp. Ricky James Rohrig (Talia McDonough). Leslie is also survived by nephews Walter Rohrig, Richard (Sue) Rohrig, six great-nieces and nephews, three great-grand nieces, and a great grand nephew. Leslie was incredibly proud to become a great grandpa to Peyton Noel King on December 5 and Caliana Rae Mazza on December 9. Les was predeceased by his loving wife Alice, his twin brother Harold and his wife Dorothy, and his niece Virginia. Everyone loved Les, even those who had just met him. He always saw the good in everyone and never had a bad word to say. He will be greatly missed. The family requests donations to the Leukemia Society of America https://givenow.lls.org/give/342076/#!/donation/checkout or the Epilepsy Foundation https://donate.epilepsy.com/index.cfm?fuseaction=donate.event&eventID=747 in lieu of flowers. “Les is more!”

The family of Mr Leslie Rohrig created this Life Tributes page to make it easy to share your memories.

Send flowers to the Rohrig family.