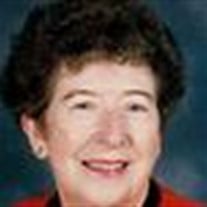 Mary Veronica Daus, 91, passed away on December 12, 2017 after a brief illness at Monmouth Medical Center, Long Branch, surrounded by her loving family. She was born in Jersey City to her parents Michael and Mary Dunne and lived in Leonardo for over 75 years. Mary graduated from Leonardo High School and Drake Business School. Mary was a devoted daughter, wife, mother of 6 children, grandmother to 12 and great grandmother to 21. Mary led a good life with a joyful marriage and together with her husband Bernard they built a loving family life for their children. Her kind and caring nature are blessings her family will hold in their hearts. Mary loved God and was a faithful member of the St. Agnes Church for over 75 years. She was an active member and officer of the St. Agnes PTA, Altar Rosary Society and St. Agnes Senior Club. She was the baker in St. Agnes School’s cafeteria for over 30 years. Mary enjoyed time with her close friends on senior trips, going out to dinner and going to the beach with Rose Zentar and Ginny Czarneski. Mary is predeceased by her beloved husband Bernard Daus in 1986, shortly after celebrating their 40th wedding anniversary. She is survived by her children and their spouses: John Daus, Florida; Bernard and Ann Daus, Leonardo; Mary and Lloyd Leschuk, Little Silver; Bernadette and Craig MacInnes, Brick; Paul and Ann Daus, Flemington; and Peter Daus, who lived with her. Mary’s grandchildren and spouses are: Bernard and Melissa Daus, Christine and Samuel Juliano, Matthew and Sandy Daus, Megan Daus, Michael Daus, Steven and Jenna Leschuk, Margaret and Kyle Walters, Craig and Michele MacInnes, Joseph and Lisa MacInnes, Ginny and Richard Woodruff, Daniel and Shannon MacInnes, and Benjamin Daus and her great grandchildren: Bernard, Henry and Ethan Daus, Samuel, Charlie, and William Juliano, Matthew and Max Daus, Aidan, Walter and John Leschuk, Violet and Abigail Walters, Kaitlin and Molly MacInnes, Lyla, Kerry and Bridget MacInnes, Daniel and Ryan MacInnes, and Bruce Woodruff. Visitation will be Friday, December 15, at Condon Funeral Home, Leonardo from 4:00 to 7:00 p.m. A funeral mass will be held on Saturday, December 16, at 10:00 a.m., at St. Agnes Church, Atlantic Highlands.

Mary Veronica Daus, 91, passed away on December 12, 2017 after a brief illness at Monmouth Medical Center, Long Branch, surrounded by her loving family. She was born in Jersey City to her parents Michael and Mary Dunne and lived in Leonardo... View Obituary & Service Information

The family of Mrs Mary V Daus created this Life Tributes page to make it easy to share your memories.

Send flowers to the Daus family.