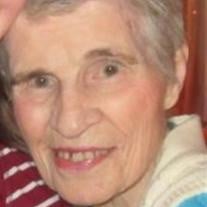 Mary Mulvaney age 87, of Leonardo died Saturday, September 1, 2012 at home. Born in Limerick, Ireland, Mary was one of 13 Brothers and Sisters. She often talked about her childhood in Ireland, and how even though they didn’t have much in the way of material things, she said they had a wealth of love and happiness and shared such great memories, of her brothers and sisters growing up. She moved to England at 16 years old during World War II and the Blitz of London. It was there that she volunteered to help out with the war effort in London’s hospitals and began what would become her profession and life’s passion, to become a Nurse. She moved to the United States in 1948. While in the States she lived in Brooklyn, and continued as a nurse working for a Doctor there. Mary worked hard to bring her brothers and sisters, along with her mother and father to America. She eventually moved to Jersey City where she met and married her Husband Edward. They married and shared 54 years together. They would have 5 sons, whom she cherished and loved unconditionally. The Mulvaney family would move to Leonardo in 1963. Mary was a Nurse employed by Riverview and Monmouth Medical Center, finishing her career in the Atlantic Highlands Nursing Home. Although a nurse professionally since the age of 16, Mary went back to school in her 50’s and earned her Nursing Degree. Although a nurse professionally, Mary was first and foremost, a loving mother to her children and an incredible role model and Nana to her grandchildren, whom she adored. Mrs. Mulvaney was a member of the Irish Federation. Mary was an incredibly loving and gracious women and her loss will be felt by anyone who ever met her. She had such an amazing faith, which she leaned on heavily during some difficult times in her life. Her courage and strength was something to behold, and not commonly found in people in this day and age. She is predeceased by her husband Edward who passed away in 2004 and 2 sons, Michael in 1963 and Edward in 1979. She is survived by her sons John, Danny and Kevin Mulvaney, Grandchildren Jillian, Savannah and Ashley Joy Mulvaney. She is also survived by Brothers Christopher, Joseph and Danny O’Connor and a sister Eileen Moynihan. Family and Friends are invited to call at the John P. Condon Funeral Home in Leonardo on Tuesday from 5-8pm. A funeral mass will be celebrated on Wednesday at 10:00AM. The burial will follow at Mt. Olivet Cemetery in Middletown. The Mulvaney family has requested In lieu of flowers please make donations to the Gregory T Hickman Foundation Leonardo, which provides for families of children with Cancer at www.gregthickmanfoundation.com Please make a donation in memory of Mary, who believed strongly in this foundation, due to her love of children and her own battles with cancer. The family would like to thank the many friends and relatives, who have been so supportive during this most difficult time.

Mary Mulvaney age 87, of Leonardo died Saturday, September 1, 2012 at home. Born in Limerick, Ireland, Mary was one of 13 Brothers and Sisters. She often talked about her childhood in Ireland, and how even though they didn’t have much in the... View Obituary & Service Information

The family of Mary Mulvaney created this Life Tributes page to make it easy to share your memories.

Send flowers to the Mulvaney family.