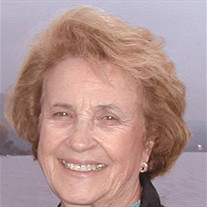 MARY A. SCIORTINO, 87, formerly of Atlantic Highlands, NJ died peacefully Monday, December 30, at House of The Good Shepherd, Hackettstown, NJ. Born in Red Bank, NJ, Mary spent much of her life in Highlands until she and husband John moved to Atlantic Highlands in 2001. Mary attended Highlands Grammar School and Leonardo High School. Mary was a devoted wife and mother. She and John began their life together in Corpus Christi, Texas, where John served in the US Navy until 1956, at which time they made Highlands their home until 2001. Mary worked at the Highlands Boro Hall and also for The Neil Guiney Agency as a real estate appraiser. She was a communicant of St. Agnes Church. Mary was known for her smile and her love of conversation. Never one to pass up the opportunity to have a chat with a friend or a stranger, she also loved to spread cheer by baking and sharing her famous apple snack cake whenever she could. When raising her children, Mary was very involved in PTA and Scouting. She was ever-present at sporting events for Pop Warner, Little League, Red Bank Catholic sporting events and dance recitals to cheer on her children. She was a proficient seamstress, an excellent cook, and, of course, loved a good glass of Pinot Noir. In recent years, Mary stayed busy with the Atlantic Highlands and St. Agnes Seniors groups, enjoying bus trips to shows and touring exciting places outside of NJ. Mary was predeceased by her husband, John, and her parents, Ralph and Josephine Julian. She is survived by daughter and son-in-law, LuAnn and Peter Rathemacher of Navesink; son and daughter-in-law, Jay and Christina Sciortino of Whitehouse Station; daughter and son-in-law, JoAnn and Steve Peck of Morristown; son and daughter-in-law, Jim and Maureen Sciortino of Long Valley; six grandchildren: Ryan, Emily, and Maggie Peck; and Katie, Jane, and Jack Sciortino. Mary is also survived by her brother Joseph P. Julian, of Atlantic Highlands. Family and friends are invited to call at the John P Condon Funeral Home in Leonardo on Friday, January 10 from, 5–8 PM. A Funeral Mass will be celebrated at St. Agnes Church on Saturday, January 11, at 11:00 AM. Cremation services are Private. In lieu of flowers, donations can be made in Mary’s name to the Employee Fund at the House of the Good Shepherd, 798 Willow Grove St., Hackettstown, NJ 07840, or on their website,https://www.hotgs.org/ways-to-give.php Click on “Click Here To Donate” then to the Donations Box, and specify “Employee Fund in the name of Mary Sciortino” in the designation box. Or St. Agnes Church, 103 Center Ave., Atlantic Highlands, NJ 07716. Be sure to mention in memory of Mary Sciortino.

MARY A. SCIORTINO, 87, formerly of Atlantic Highlands, NJ died peacefully Monday, December 30, at House of The Good Shepherd, Hackettstown, NJ. Born in Red Bank, NJ, Mary spent much of her life in Highlands until she and husband John moved to... View Obituary & Service Information

The family of Mrs Mary Sciortino created this Life Tributes page to make it easy to share your memories.

Send flowers to the Sciortino family.