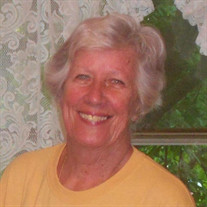 Mildred Frances (Dolan) Kozak passed away at home on February 25, 2021, within hours of the funeral Mass for her beloved husband, Tommy. Her death comes after a lengthy battle with Alzheimer’s . Born on July 9, 1937 to John and Rita (McMahon) Dolan, she was the seventh of what would eventually be a family of 10 children. The family lived on Dick Street in Jersey City, NJ. Mildred attended St Aden’s School there before the family moved to Leonardo, NJ, where she continued her education at Leonardo Grade School and Middletown High School. While a teenager, she got her first job working at the Blind Man’s Club, where her “commute” entailed walking across the street from her house. In 1957 Millie met her future husband, Tommy, while on a drive with her sister, Pat. Pat knew Tommy, but Mil, the driver, wanted to meet him, so she “tapped” his car from behind! No damage was done and they all went out for pizza. The rest, as they say, is history! Mil and Tommy were married on October 11, 1958 at St Agnes Church in Atlantic Highlands, NJ. The newlyweds lived in Tommy’s family home in Atlantic Highlands while they built their home on Harbor View Drive. They moved there in 1961, and over the years raised four children and created many memories. Before marrying, Mil worked at the phone company as a telephone operator, but, as was the custom, once she had children she stayed home to care for them. It was after all the kids were in school that she returned to work, first at an answering service on Hwy 35 in Middletown and then as a home health aide at MCOSS. Millie loved helping her “clients”, many of whom would remain in her life even after they were out of her care! After Tommy retired in 1994 the couple kept busy by traveling and volunteering. Mil had always wanted to see Jackson Hole, WY, so they enjoyed a three week drive across the country. Cruises and a sailing trip in Maine were other memorable vacations. Mostly, though, Mildred took care of her family. All her children were the recipients of her time and talents. And each grandchild was spoiled, doted on, and made to feel special. A gifted seamstress, Mildred sewed many of her daughter’s dresses over the years, made each of their wedding dresses, and altered her daughter-in-law’s. Millie and Tom, always a team, volunteered at the American Cancer Society as drivers for cancer patients, and at St Agnes Church, where Mildred tended the altar cloths. She was also a member of the Atlantic Highlands Garden Club, where she was able to show off her “green thumb”. Mildred was predeceased by her beloved husband, Thomas, as well as her parents and 8 siblings: John (Jackie), Charles, James, Roger, and Joseph Dolan, and Loretta McLaughlin, Ann Caizza, and Patricia Biancamano. She is survived by her children, Mary and Jim Fleitz (Peekskill, NY), Thomas and Debra Kozak (Bloomingdale, NJ), Carol and Robert Pyburn (Union Beach, NJ) & Jean and Russell Mount (Navesink, NJ). Additionally, she leaves her adored grandchildren, each of whom she was proud of: Nicholas and Jacquelyn Kozak, Megan and Daniel Fleitz, Anna Mount, and Zoey Pyburn. She is also survived by her sister, Rita Haimbaugh of Havelock, NC, and sisters-in-law Eleanor (Roger) Dolan and Joyce (Stanley) Kozak, and over 100 nieces and nephews! Believe it or not, before becoming ill, she remembered most of their birthdays! Funeral arrangements are under the care of John P Condon Funeral Home in Leonardo. Millie did not want a wake, so a brief service will be held at the funeral home for immediate family only. The funeral Mass will be celebrated at St Agnes Church at 11:00 am on March 2, 2021. In lieu of flowers, please consider a donation to the Alzheimer’s Association of NJ, 425 Eagle Rock Ave #203 Roseland, NJ 07068, or the MS Association of America 375 Kings Hwy N, Cherry Hill, NJ 08034.

Mildred Frances (Dolan) Kozak passed away at home on February 25, 2021, within hours of the funeral Mass for her beloved husband, Tommy. Her death comes after a lengthy battle with Alzheimer&#8217;s . Born on July 9, 1937 to John and Rita (McMahon)... View Obituary & Service Information

The family of Mrs Mildred D Kozak created this Life Tributes page to make it easy to share your memories.

Mildred Frances (Dolan) Kozak passed away at home on February...

Send flowers to the Kozak family.