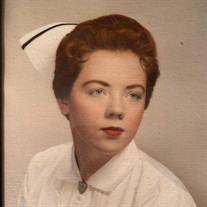 Patricia Anne O’Brien was born November 7th, 1937 in Jersey City, NJ. She grew up in Jersey City and attended Holy Family Academy high school, after which she attended St. Joseph’s nursing program graduating in 1957 as a registered nurse. In 1958 she married James J. O’Brien and had four children: Noreen, Terrence, Erin, and Kevin. Later in life, she earned her bachelor’s degree in Human Services from Thomas Edison State College. Patricia’s nursing career spanned more than forty years. She specialized in Psychiatric and Addictions nursing and was a certified substance abuse counselor. In addition to her full-time practice as a manager at Raritan Bay Medical Center, she worked as a counselor in a substance abuse recovery program for nurses (RAMP) within the New Jersey State Nurses Association. She spoke frequently at conferences throughout the state and was a popular speaker in her specialty. Patricia was an avid reader and an advocate of life-long learning. She read broadly and enjoyed learning about other countries and cultures. She listened to radio programs late into the night, learning new topics, which she shared with her family. She encouraged her children and grandchildren to continue their education beyond formal training through reading and other pursuits. Patricia traveled with her husband James throughout the United States and Europe. She also enjoyed spending time with her sister, Kathleen Fasano, with whom she went on cruises and attended plays. Patricia and Kathleen were close and shared many fun times together. Upon retirement, Patricia dedicated herself to her children and grandchildren. She loved spending time with her five grandchildren, with whom she played and showered with gifts. She and Jim spent countless hours babysitting the grandchildren, reading to them, and eating ice cream. After a long and productive life, Patricia passed away at home on Friday, September 3rd surrounded by her loving family. She is predeceased by her daughter Noreen O’Brien and is survived by her husband James O’Brien of 63 yrs., children Erin Clayton & husband William; Kevin O’Brien & wife Sandra; Terrence O’Brien, and five grandchildren: Kyle, Brianna, Kevin, Isabel & Marisol, all who she loved dearly. Visitation is Tuesday, September 7th from 4-7 pm at the John P. Condon Funeral Home in Leonardo, NJ. A funeral mass will be held at St. Agnes Catholic Church in Atlantic Highlands, NJ starting at 10 am. Her burial will be at Bayview Cemetery in Leonardo after the funeral mass, and a repast will be held at the Shore Casino in Atlantic Highlands starting at 1 pm.

The family of Mrs Patricia A. O'Brien created this Life Tributes page to make it easy to share your memories.

Send flowers to the O'Brien family.