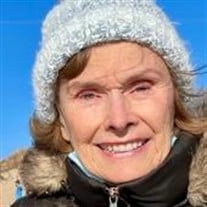 Patricia Ann Severin Rovere peacefully entered eternal rest at Monmouth Medical Center on Thursday, June 17th, 2021, age 86. Her loving daughters were by her side holding each of her hands. Patricia was born in Bound Brook Hospital in Bound Brook, New Jersey to Rosalie Naylor Severin and Cyril Curt Severin on March 1st, 1935. The family moved to Somerville, New Jersey and Patricia attended Somerville High School, graduating in 1953. She was the Head Majorette for the Somerville High School Marching Band and the V.F.W. She was a member of the Dutch Reformed Church and the Daughters of the American Revolution. She was an avid and skilled athlete, and loved tennis, swimming, ping-pong, Tae Kwon Do, ice-skating, and skiing. In her later years, she was excellent at “corn-hole” and bowling, often putting her grandchildren to shame! Patricia graduated from the School of Nursing at Syracuse University on February 1st, 1958. During a blizzard two weeks later she married the love of her life, George Davitto Rovere who was attending medical school at Syracuse. They raised two daughters, Dr. Dina Ann Rovere (Marko Sima), of Atlantic Highlands, N.J. and Dr. Elizabeth Ann Rovere (Brian O’Kelley), of Brooklyn, New York and is survived by five grandchildren: George Rovere Sima (18), Charles Dean Sima (15), Karsten Vance Sima (15), Anjali Della Rovere O'Kelley (11) and Astara Raven Rovere O'Kelley (18 months). Patricia was preceded in death by her loving parents, husband, sister Joan Rosalie Severin Yeager (Gerald Adrian Yeager) and her brother Richard Cyril Severin. Patricia and George led an exciting life as George's medical profession took him to various locations, ending up in Winston-Salem, North Carolina at the Bowman Gray School of Medicine, Wake Forest University. George became the Chief of Orthopedic Surgery and was the Founder and Head of the Sports Medicine and Athletic Training Program at Wake Forest University. Pat’s professional career included surgical nursing at Hackensack Hospital, The Visiting Nurse Association in Plattsburgh, NY, NYU Rusk Institute of Rehabilitation Medicine in New York City, and Mountainside Hospital in Glen Ridge, NJ. Once the family moved to Winston-Salem, NC in 1973, Patricia stopped her work to focus on raising her family and being an active member of the community. Never wanting to leave medicine entirely, she maintained a foothold doing volunteer work for Red Cross blood drives. Pat was active with the Bowman Gray Medical Center Guild and the Piedmont Medical Alliance. She was the President of the Opera Guild, involved in the Little Theater, and the Red Hat Society, later retitled The Angels. Her love of nature and birds took her to the Audubon Garden Club of Winston-Salem where she served a term as President. She won several awards for outstanding performance, compassion and dedication. Pat was a member of the St. Paul's Episcopal Church in Winston-Salem. Pat had a strong love of animals, especially dogs, horses, and elephants. Her first love was a terrier mix, Fleabus, and then her many Golden Retrievers: Blaze, Liebchen, Amber and Shelley. She loved the ocean and spent a lot time on the Jersey Shore and Wrightsville Beach NC. Pat was a loving, caring person who was surrounded all her life with family and dedicated, loving friends. A viewing, 5-6:30, pm and memorial service, 6:30 pm will be held on Monday, June 21 , 2021 at the John P. Condon Funeral Home in Leonardo, NJ. Her burial service will take place at Frank Vogler & Sons in Winston-Salem on July 1, 2021. Flowers or memorial gifts can be made to the George D. Rovere Scholarship at Wake Forest; the Zambezi Elephant Fund; or to the Audubon Society.

Patricia Ann Severin Rovere peacefully entered eternal rest at Monmouth Medical Center on Thursday, June 17th, 2021, age 86. Her loving daughters were by her side holding each of her hands. Patricia was born in Bound Brook Hospital in Bound... View Obituary & Service Information

The family of Mrs Patricia Severin Rovere created this Life Tributes page to make it easy to share your memories.

Send flowers to the Rovere family.