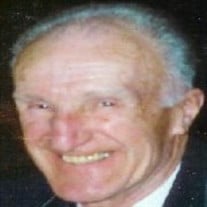 Warren Gove Betz, age 85, of Bowmansville PA died Thursday, February 19, 2004 at Riverview Medical Center, Red Bank. Mr. Betz was born in Manhattan, NY he lived there before moving to the Atlantic Highlands in 1948 he then moved to Leonardo in 1964 and then in 1983 he moved to PA. He served his country in the United States Army during WWII. He worked for NJ Natural Gas as a welder then he worked for Atlantic Utilities also as a welder and finally as a boiler tech and pipe fitter at the Naval Weapons Station Earle where he finally retired in 1984. He is predeceased by his wife Dotrothy in 1996, his brother Frederick Werner, Jr and sister Eleanor Conover. He was a member of the VFW in Allentown Pa. He loved travelling and has visited all across the US. He is Survived by his Daughter and Son in law Donna and Robert Sidorski of Atlantic Highlands Daughter and son in law: Veronica and Brian Boyce of West Keansburg Son and Companion: Edward Betz and Sandy Perry of Middletown, Son and Daughter in Law: Warren and Eileen Betz of Atlantic Highlands Son and Daughter in Law: Robert and Lisa Betz of Middletown, NJ, Grandchildren: John Thavenius, Samantha Sidorski, Robert Sidorski, Lauren Boyce, Brian Boyce, Heather Betz , Edward Betz,Jr, Emily Betz, John Betz, Brianna Lynn and Alicia Betz Brother of one sister: Dorothea Fergusen of Woodside, NY Calling hours will be Monday from 2-4 and 7-9 pm at John P. Condon Funeral Home, 804 St. Hwy. #36 P.O. Box 354, Leonardo, NJ. The funeral will be Tuesday at 10:00 at St. Agnes Church, 103 Center Ave, Atlantic Highlands where a Mass of Christian Burial will be Celebrated. Burial will be in Mt Olivet Cemetery, Middletown on Tuesday following the Mass. For further information visit us at www.johnpcondonfuneralhome.com

Warren Gove Betz, age 85, of Bowmansville PA died Thursday, February 19, 2004 at Riverview Medical Center, Red Bank. Mr. Betz was born in Manhattan, NY he lived there before moving to the Atlantic Highlands in 1948 he then moved to Leonardo... View Obituary & Service Information

The family of Warren Gove Betz created this Life Tributes page to make it easy to share your memories.

Send flowers to the Betz family.